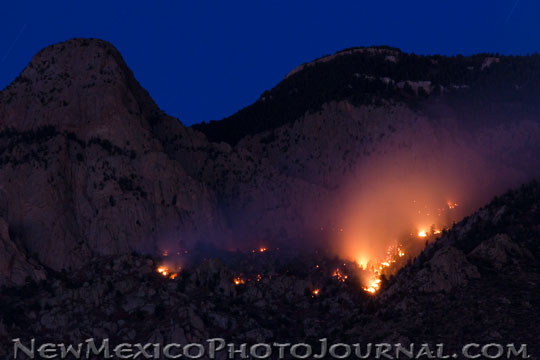 A small version of the event many of us in Albuquerque fear occurred on Friday: a wildfire on the west face of the Sandias. It broke out in Chimney Canyon, which I have always understood to be a very rugged area (I have never even been tempted to hike it). The Forest Service says it’s still investigating — indeed, they are still working at putting out the fire — but I feel fairly sure this fire will be shown to have been human-caused. There’ve been no lightning storms recently; it doesn’t seem super dry in the Sandias right now; and it wasn’t windy on Friday. We have been blessed, in fact, with very light winds since the fire broke out. Heartbreaking — yet, as is true so often with fire and smoke, it made for some good photos.