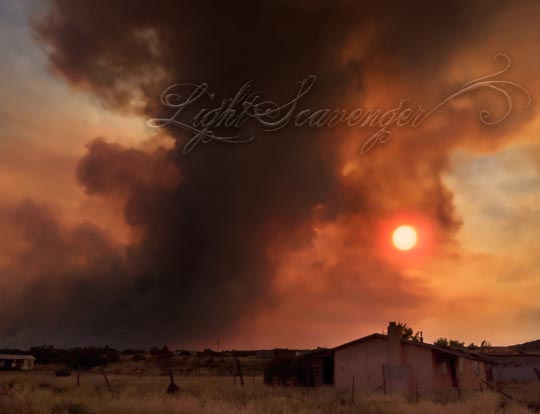 The Dog Head Fire started in the Manzanos on Tuesday. On Wednesday, I decided to go down Highway 337 (still colloquially called “South 14”) and see what I could see. I figured I’d run into a road block and I did. I slowed down, wondering what convincing lie I could tell to get past it; and in the midst of my pondering, one of the two cops waved me past. I got as far as Chilili, where everybody and his brother was hanging out on the main road, looking at the smoke. I took a few shots, got back in my car, and decided it was time to turn around.

Later I learned that Chilili had been placed on a mandatory evacuation status about 40 minutes after I left. Moral of the story: I’ll do almost anything for a shot. Good sense does triumph every once in a while though.