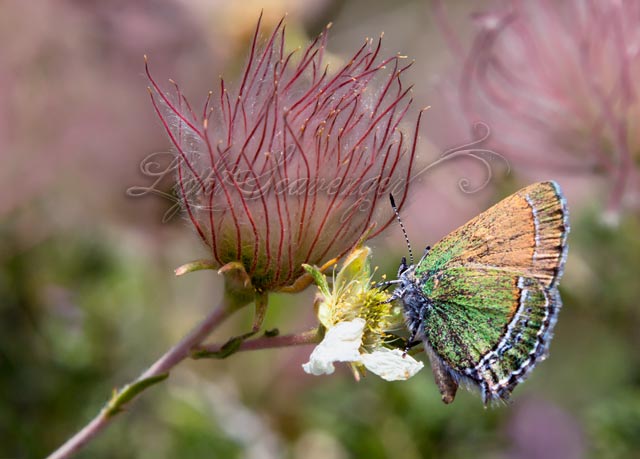 You may (or may not) have noticed that I didn’t post any photos of Sandia hairstreaks this spring. Usually I see them in March and the beginning of April — and that’s it. This spring I saw exactly one Sandia hairstreak, despite the fact that I looked all over for them.

I have seen them in June on a couple of occasions, most notably the very first year I ever saw them (in 2005) but that’s the exception rather than the rule. So imagine my absolute delight (not to mention relief) when I saw two sipping from Apache plume flowers this morning (I had seen a third about a half hour earlier, on beargrass).

Honestly, I was worrying that they were going extinct. I know that’s extreme, but I saw very few last year and only the one this spring. My worry is greatly alleviated now that I’ve seen these little guys. As I understand it, they must be part of the recently metamorphosed new brood that will overwinter until next spring. That they were on Apache plume, one of my very favorite flowers and oh-so-hard to get a good shot of, was icing on the cake.