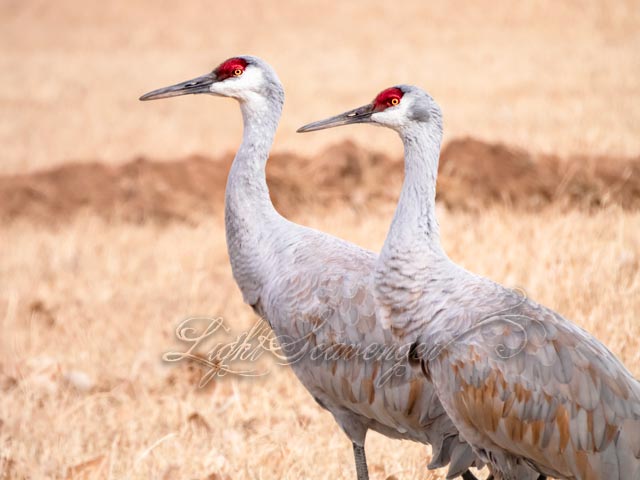 Up close and personal — a couple of the cranes who were featured in the sunset photo/video post a couple of weeks ago.

I’m not sure I’ve ever mentioned that sandhill cranes played a significant part in me becoming a photographer. 18 years ago I bought an “ultra-zoom” camera. It was the Olympus C2100UZ, with a whopping 10x zoom and two — count ’em — TWO whole megapixels. Turned out that camera had a bit of a cult following for a while, of which I was unknowingly a part.

In any case, I took it out for a spin in Albuquerque’s bosque right after I got it, and shot a couple of crane photos. At the time, cranes were just about the only kind of bird I could identify because I actually don’t see very well at all. They were the only birds that were big enough for me to identify.

I took the camera home and uploaded the photos to my computer. I was absolutely shocked when I realized that “those birds have red heads!” I’d honestly had no idea until I saw those photos. And that is the continuing allure of photography for me: it allows me to “see” all sorts of stuff I couldn’t otherwise.